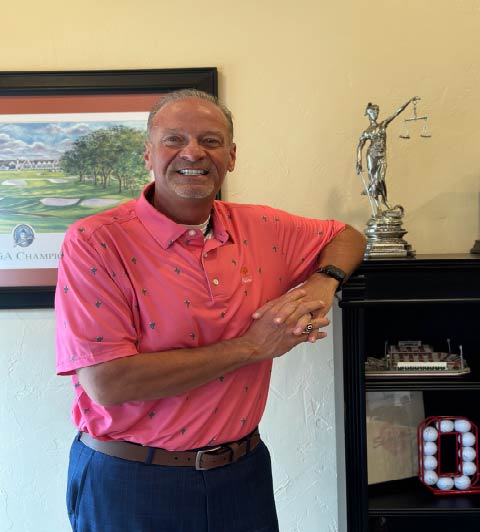 Focusing his practice largely on complex civil litigation, R. Greg Andrews is the managing member at Andrews Law. Based in Norman, Oklahoma, he represents people and businesses throughout the state. An Oklahoma native, Mr. Andrews became admitted to practice before all of its state courts in 2001, and he is additionally admitted to practice before the U.S. District Courts for the Eastern, Northern and Western Districts of Oklahoma, the U.S. Court of Appeals for the 10th Circuit and the Supreme Court of the United States.

A large portion of Mr. Andrews’s practice is centered on construction litigation, and he has the unique distinction of representing both plaintiffs and defendants in this regard. Some of his representative successes have included multiple million dollar recoveries on behalf of his homeowner clients, as well as numerous defense verdicts and judgments on behalf of his contractor/builder clients.

Outside of the construction area, Mr. Andrews has handled insurance bad faith and other insurance coverage claims on behalf of the insurance company and the insured, as well as personal injury, fraud, deceptive trade practices and consumer protection, and he has argued them before arbitration panels as well as in the courtroom before judges and juries. He also has extensive experience in family law, resulting in Mr. Andrews being selected to serve as the co-editor of the Oklahoma Family Law Journal and Oklahoma Family Law Practice Manual. Mr. Andrews is also Fellow of the Oklahoma Bar Foundation, and served an active role in the Ruth Bader Ginsburg American Inn of Court where he served as the Mentoring Committee Coordinator, and received both the President’s Award and Outstanding Associate Award.

Prior to college, Mr. Andrews represented his country with distinction as a Security Policeman in the United States Air Force, and he was awarded several medals for his service in Operation Desert Storm. He then enrolled at The University of Oklahoma and received a Bachelor of Arts in both English and history. Mr. Andrews remained on campus for his legal education at The University of Oklahoma College of Law and graduated in 2001. During law school, Mr. Andrews also attended Brasenose College, Oxford University, Oxford, England, where he received the American Jurisprudence Award for the study of Family Law.

Mr. Andrews holds an AV Preeminent peer review rating* from Martindale-Hubbell along with numerous other accolades from his peers. The AV Preeminent rating is awarded to less than five percent (5%) of all attorneys across the United States and is the highest rating offered by the Martindale-Hubbell Law Directory. Mr. Andrews has also earned a perfect five-star rating on his reviews and positive referrals from his satisfied clients, resulting in Martindale-Hubbell awarding him with the greatest professional accomplishment by naming him as a "Client Champion" with Platinum Distinction, which is the ultimate referral by those who matter the most, the client - a distinction that fewer than one percent (1%) of all attorneys attain.